nofollow
back to cultofmac.com
Learn a New Language Anytime, Anywhere! Get Lifetime Access to Babbel Now!
Give $10, Get $10
Get $1 credit for every $25 spent!
Ending In:
View similar items
Ending In:
add to waitlist 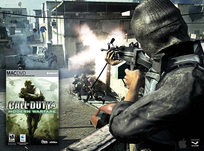 There's A Soldier In All Of Us (Mac Only)

Go behind enemy lines in Call of Duty: Black Ops as a member of an elite special forces unit. Engage in explosive conflicts across the globe as you follow a campaign of covert warfare, classified operations, and secret wars that occurred under the veil of the Cold War - your actions will tip the balance during the most dangerous time period mankind has ever known. Complete the epic single-player campaign or team up for an incredibly deep co-op gameplay experience. Using the revamped COD: World at War engine, Black Ops is another step forward in graphics, streaming texture technology, and lighting effects. Bonus Content Game includes the First Strike DLC, which gives you 5 incredibly diverse maps spanning the globe, including 4 new multiplayer maps and a chilling new Zombie experience. TOP FEATURES

*Metacritic Score: 81/100* "Black Ops is a thoroughly excellent game. New modes and mechanics give a jolt of energy to the lively competitive multiplayer, and the engrossing new campaign develops into one of the best in the series." (9/10) - GameSpot "Call of Duty: Black Ops is a great overall package that has a ton of content to enjoy. The multiplayer modes are largely based on what was established by Modern Warfare, but the twists that Treyarch throws in work well...the story is the best I've ever seen from a Call of Duty game." (8.5/10) - IGN

Enter The Next Generation Of Combat

For you gamers out there that aren't looking to spend an arm and a leg for COD: Ghosts you can now experience this award-winning title for pennies on the dollar. Fighting as both a U.S Marine and British S.A.S. soldier, you will utilize sophisticated technology and weaponry to take control of the battlefield and to lead your squad to victory.

WHY YOU'LL LOVE IT

Get hours of action packed, gun wielding fun with one of the best FPS franchises out there. In our minds, you can't go wrong with an epic single player storyline and classic multiplayer gameplay that lets you immerse yourself in dynamic battle scenes so you can fight your way out.

Fight In The Most Epic Battles Of WWII (Mac or PC)

Join the battle in the sequel to the iconic Call of Duty, and *experience a more immense, intense, realistic warzone* than ever before. With a *revamped game engine*, tons of new improvements were made over its predecessor. From stunningly realistic graphics, to seamless gameplay, improved AI, and strategic battlefield tactics allow you to experience *the closest thing to real warfare*. Beautiful environments with realistic weather effects - snow, rain, fog and smoke - combined with dynamic lighting and shadows, make this *an epic WWII shooter*. TOP FEATURES

*Metacritic Score: 86/100* "Infinity Ward's World War II shooter is a must-have maelstrom of frenzied brilliance." (9/10) - IGN "Call of Duty 2 is just about everything you'd hope for and expect from a next-generation first-person shooter." (8.8/10) - GameSpot

Expand Your Battlefield WIth Ten New Maps (Mac Only)

Get ready for an even more epic gaming experience wIth this expansion pack for Call of Duty: Black Ops. With 8 new multiplayer maps and 2 new zombie levels, you'll get to fight for your life on completely fresh territory. THE MAPS ZOMBIE MAPS

"The new maps are fantastic and add a lot more variety and color to the Black Ops Multiplayer experience. And the two new zombie maps are among the best there is. - Inside Mac Games "If you’re itching for more Black Ops, Treyarch won’t disappoint you with Annihilation, and the same goes for die-hard Zombies fans." (80/100) - Game Front

Out Of This World Zombie-Slaying Fun (Mac Only)

Prepare yourself for an *out of this world Zombie experience* in this expansion pack for Call Of Duty: Black Ops. Explore the all-new Moon level, where *armed with a space-age arsenal of weapons*, you must fight back *waves of undead astronauts* and adapt to fluctuating gravity as you unearth conspiracies dating back to World War II. Just remember, *in space no one can hear you scream*. Also included in the Rezurrection pack are *four re-mastered levels of COD zombie lore*: Nacht der Untoten, Verruckt, Shi No Numa and Der Riese, the Zombie factory that started it all. And slay to the beat with an *enhanced zombies soundtrack* including three tracks never before available for purchase.

*Metacritic Score: 70/100* “Moon,” is completely new and pretty much the most insane zombie-killing playground that Treyarch has yet unleashed." - Digital Trends "It’s a great, difficult mode with a lot to offer, and this DLC pack...really fleshes it out for the first time...The Zombies maps have also been the site of some of the major creativity available in Black Ops, and Moon takes a rightful place among the other great Zombies experiences Treyarch has turned out." (75/100) - Game Front