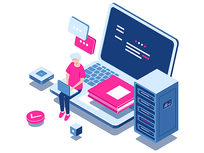 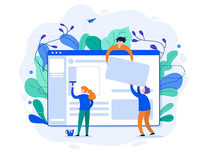 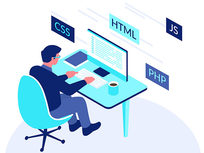 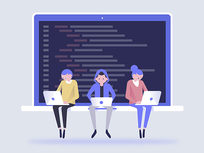 How to Become a Programmer
$200 Value 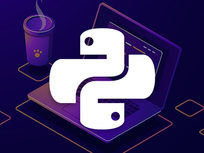 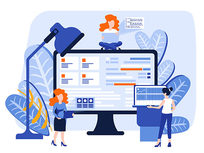 By Brad Hussey | in Online Courses

Stop wasting your time and money! This is the ultimate, most comprehensive, A to Z web design, development and career-building course on the market. You'll learn the essentials of visual and web design and then practice programming and web development skills. After you've learned everything from design to development, you'll be taken through a hands-on career section fully-loaded with valuable tips, resources, and real-world guidance to help you start your career. You will go from knowing nothing to creating over 23 impressive designs, websites, and applications.

A highly skilled professional, Brad Hussey is a passionate and experienced web designer, developer, blogger, and digital entrepreneur. Brad builds custom websites and provides design solutions for a wide-array of clientele at his company, Brightside Studios--when he's not passing on his knowledge to hundreds of thousands of students and counting through his online coding tutorials.

By Brad Hussey | in Online Courses

Do you want to supercharge your HTML, CSS, and PHP knowledge and learn how to turn them into a real business that can make you more money as a freelancer? This course will get you working towards building an incredibly beautiful, 100% custom website using the Bootstrap framework. The coolest part? The Bootstrap website doesn't look anything like the Bootstrap websites you see all over the Internet. It's a highly customized design, and the type of website layout the instructor uses when he builds custom WordPress websites for real-life clients.

A highly skilled professional, Brad Hussey is a passionate and experienced web designer, developer, blogger and digital entrepreneur. Brad builds custom websites and provides design solutions for a wide-array of clientele at his company, Brightside Studios--when he's not passing on his knowledge to hundreds of thousands of students and counting through his online coding tutorials.

Work Your Way Through HTML, CSS, JavaScript & Bootstrap and Start Your Career as a Programmer

By Coder Vox | in Online Courses

Are you interested in becoming a programmer, but don’t know where to begin? If so, then this is your starting point. This 16-hour course teaches you the fundamentals of front end web development. It contains detail-oriented videos about the languages and frameworks of the front end web. This course is heavily project-based. The most important thing to get a job as a web developer is your portfolio, and in this course, you'll build real-world projects that you can claim as your own!

Jon Lue is a software engineer and instructor, and he teaches coding at a college in Austin, TX. He has a degree from the University of Texas at Austin and has been a web developer for over six years. He started making websites as a hobby, and it soon became a career. Along the way, he also discovered that he had a gift for teaching. His main strategy as a teacher is to break down hard to understand technical terms into smaller pieces so that students can easily understand it.

How to Become a Programmer

Your Practical Guide on Everything You Need to Know to Be an Effective, Successful Programmer

By Coder Vox | in Online Courses

You already know that learning to code is becoming increasingly important, but what often isn't clear are the steps to becoming a professional developer. This course takes a detailed, insightful, behind-the-scenes look at the tech world, and shows how you can join thousands of other people who are ditching their stressful, low paying jobs for well-paid programming positions. Assuming that you have zero knowledge about programming, this course takes the complex parts and break them down into smaller chunks that make it easier to absorb.

Learn Python 3 from Beginner to Advanced

By Ermin Kreponic | in Online Courses

Python is widely considered one of the best first programming languages to learn because of its general-purpose nature and its relatively simple syntax and readability. This course will introduce you to the newest version of Python, Python 3, and teach you how to utilize this important language through hands-on examples. If you've ever wanted to learn to code, this is the place to start!

Ermin Kreponic is a strongly motivated young IT expert, Linux enthusiast with a passion for troubleshooting network related problems. He has an exceptional eye for details and a sense of urgency when it comes down to problem-solving.

Jerry Banfield has been an online entrepreneur since 2011, having served hundreds of clients in over 20 countries and managed billions of Facebook ads. He has learned how to drive large amounts of organic Google and YouTube traffic to his website, and teaches online courses sharing his experience with students worldwide. A member of the MENSA Society, Jerry holds degrees from the University of South Carolina and the University of South Florida.

Become a Web Developer: Learn the Basics & Fundamentals of Ruby

Learn Everything You Need to Know to be Successful with Ruby

By John Bura | in Online Courses

Beautifully simple, succinct, and reading like English, Ruby is one of the easiest programming languages for newcomers to pick up. This hands-on course serves as your Ruby primer, offering a step-by-step look at what it takes to code with Ruby—no experience required.

John Bura has been programming games since 1997 and teaching since 2002. John is the owner of the game development studio Mammoth Interactive. This company produces XBOX 360, iPhone, iPad, android, HTML 5, ad-games and more. Mammoth Interactive recently sold a game to Nickelodeon! John has been contracted by many different companies to provide game design, audio, programming, level design and project management. To this day John has 40 commercial games that he has contributed to. Several of the games he has produced have risen to number 1 in the Apple’s app store. In his spare time John likes to play ultimate Frisbee, cycle and work out.